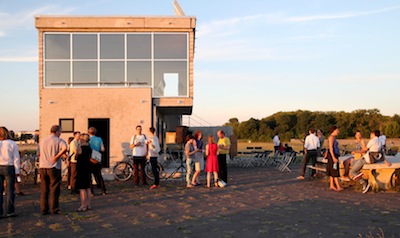 Open-air science fiction soundscape opera to be performed five times at the end of August/ beginning of September 2017. The artwork “Plattenvereinigung” of a one-storey panel building in the form of a cube placed on the Tempelhofer Feld by Zukunftsgeräusche GbR, the barren and futuristic concrete square in front of it, as well as the enormous view of the field are to serve as the venue and stage set for the soundscape opera.

From a stone plateau, across the forecourt, the spectators look down on the glass front of the record building. Sounds produced live by four performers with their voices are heard immersively from several loudspeakers. The imitative voices and movements of the performers build a sensual bridge to objects and sounds of modern technology that accompany us in the 21st century. Their voices imitate noises, which in their electrical amplification create a multi-layered soundscape. The site-specific noises, such as the chirping of crickets, the howling buzz of the S-Bahn or the barking of a dog in the distance, are recorded and amplified; the voices immediately refer to them. The performers set themselves in a joyful relationship with their surroundings.

The performative handling of the imitative voice is an essential part of the work of sound artist Vera Buhß.

ARCHAIC THRILL is expanded by the voice repertoire and the performative expression of singer Thorbjörn Björnsson, dancer Hermann Heisig and actor Wieland Schönfelder, who all illustrate the changing atmosphere. The vocal resonance is dedicated to the surroundings and forms a composition for the expanse as well as for the change from daylight to evening mood. The voices make themselves similar to the things and the environment. They nestle delicately against it. They protest against the one-sided acoustic irradiation, echo back into the surroundings and call out into the distance. They follow the associations. The perceived turns into fiction. For example, the voices record the perpetual murmur of the wind on the field, amplify it, and transform it into the thundering propellers of airplanes that once took off and landed on the field. The vocal imitation is finally transformed into songs.

The resulting opera composition moves in the interplay between origin and technology. Opposites culminate in the ARCHAIC THRILL, and the voices and movements of the performers reinterpret representative objects for the digital age. Performatively, they use technical devices that replace and expand human capabilities in today’s world, and reclaim their sensual relationship to their surroundings. The feedback from two mobile phones, this shrill, nerve-racking noise, is transformed by vocal imitation into a delicately sweet question-answer game.

The alternating singing continues in the imitation of the sounds of sending and receiving. Situations and stories emerge, which use modern forms of communication in an unusual way and refer to their accompanying symptoms. Modern man’s need to communicate, as manifested in social networks, can be perceived as desperate if we fear that digitalisation will cause him to lose a sensual connection to his surroundings.

ARCHAIC THRILL provokes this concern and plays with the question of whether we can consciously and sensitively deal with contemporary means of communication. They belong to our world, which we don’t want to experience as empty and only rarely interspersed with relationships. We want to relate to the objects and living beings around us, to refer to them, to be in sensual bonds with them.

That is why ARCHAIC THRILL inspires the things around us, by the human voice appearing again and again devotionally behind its original sounds. The performers recapture their surroundings by physically appropriating the technical equipment.