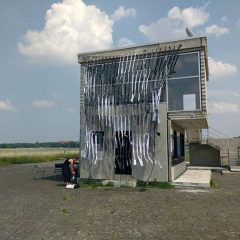 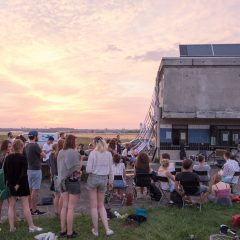 From the French camoufler [to disguise], camouflage netting, developed during WWI, is typically deployed to conceal and deceive. Later, terrain specific patterns accommodated for warfare in urban spaces, such as “Berlin Camouflage” which used fields of grey to mimic the concrete architecture of post-war Berlin. As much as the ultimate function of camouflage is to disguise, so its means of production is also hidden from view; indeed, it is most often the work of the women, who remain on the ‘home-front’, their hands collectively and deftly weaving these patterns of protection. Now Atceken & Hughes will weave their own Berlin Camouflage to be applied to the concrete facade of the Plattenbauvereinigung building, located in Berlin’s disused airfield, Templehofer-Feld. What is the relationship between the material history of the Plattenbau structure and the legacy of the Berlin Camouflage pattern? What is the effectiveness of this manual labour today? And is such an intervention a meaningful gesture or merely a decorative application, designed to ornament a universal modernist facade?