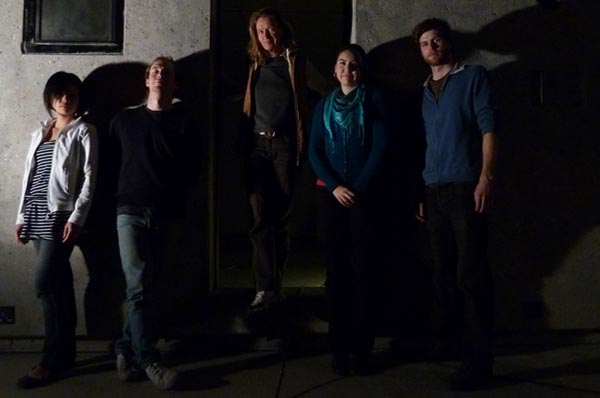 After weeks of traveling through impassable terrain, the jungle clears. The viewer recognizes a prefabricated building, the two researchers only a mysterious building made of concrete. A feeling of dread mixes with fascination; they begin to explore the house, past stories revive, threatening and enchanting. BuiLding 22 make use of their foreign view on German history and show the familiar from a distance.

BUILDING 22 is a group of four Canadian architecture students from Ottawa who are realizing various projects in Berlin from September to December 2010. Ana Brooks, Carmen Cheung, Evan Dysart and Daniel Rennie from the Azrieli School of Architecture, Carleton University question in their work the possibilities and limits of participation in forms of public space. Their designs are informed by the approach of New York architect John Hejduk, who uses the concept of the “architectural mask” to describe urban institutions and exhibit them as urban pathologies. As part of the PAST FORWARD festival, Building 22 will show their prelude, “The House of Siblings.” The work was coordinated by Dr. Annette Homann, Adjunct Research Professor at the Azrieli School of Architecture.